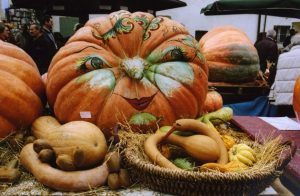 Just a year ago, the title of “the Most Beautiful Village in Italy” or Borgo dei Borghi d’Italia 2017 was assigned to the town of Venzone, in the province of Udine. In fact, of the 19 villages in the running, Venzone had the highest score based on both the evaluations of a jury of experts (such as geologist Marco Tozzi, art critic Philippe Daverio and starred chef Cristina Bowerman), and votes cast by viewers.

The victorious village of Venzone is bringing back its Pumpkin Festival for the 26th edition from October 27-28, 2018. An intriguing mix of flavors and fun so captivating that once you’ve experienced it, it will have you coming back year after year. 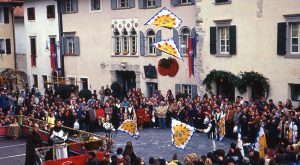 In the cozy atmosphere of this pleasant medieval town time seems to go back to the era of the ancient chronicles of the Terra di Venzone. As if out of a book of fairy tales, cheerful figures- mattacchione- appear here and there  to cheer travelers in the company of jugglers, musicians and fire-eaters. The “Mayor of the Pumpkin” parades among the people surrounded by ladies and knights, members of the Sacred ArciConfraternita della Zucca, warriors as well as funny characters such as beggars, birds, and charlatans… all beautiful, whimsical and characteristic.

On Saturday, October 27, the taverns will open and “His Majesty the Pumpkin” will reveal himself in all his royal presence: first through the medieval arts and crafts performers that will show their talents in the streets of the fortified village, then in the taverns enlivened by music, games and stories of the Cucurbita Felix in Taberna, which will culminate with shows along the streets of Venzone. 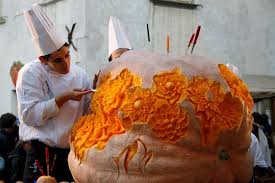 Sunday, October 28, will be the highlight of the event that, needless to say, cannot be missed! The pumpkin contest starts at 10:00 am when an impromptu instrument called a “pumpkin-ometer” will measure their size, as well as a children’s pumpkin carving contest with special prizes. Some of the heaviest have exceeded 390 kilos! Awards will go to the longest, the best inlaid and decorated and best overall composition. Then, after the arrival of delegations from Austria and Slovenia, the “Archduke of the Pumpkin” will be elected and at 2:30 pm, following the award ceremony for the best pumpkins, the “Great Medieval Festival” will begin in the historic center of the village. Torch-lit streets, medieval music, a parade and performances by jugglers, archers, crossbowmen and duelists will take you back to the fifteenth century. The event will culminate at 18.00 with the collective lighting of the torches and with the usual closing ceremonies.

They say that “His Majesty the Pumpkin” derived from the story of a golden pumpkin that had been placed on top of the bell tower of the Duomo for spite and then fell ruinously to the pavement below. But now, the true story is that thousands continue to flock to Venzone each year to pay homage.