Carnival in Fano: One of the Oldest in Italy

All throughout Italy, the month of February is defined by the joy, colors, and traditions of Carnival. The Marche region is no exception. One of the oldest Carnivals in all of Italy is held every year in the village of Fano. Let’s find out some of its history and traditions.

Carnival festivities have been taking place in Fano since 1347. At least, that was the first Carnival in recorded history here. This year’s dates are February 9, 16, and 23.

Another slightly unique tradition in Fano is the “launching” of sweets from the floats during the parades. Tons of candies, chocolates, and sugared almonds rather than paper confetti are thrown from the allegorical floats as they parade down the streets. Many of the sweets are supplied by the Perugina® Factory (also located in the Marche region).

Because of this particular custom, the Fano Carnival is known as the “sweet carnival”.

The allegorical floats that invade the streets of the town are made of paper-mâché and foam rubber. Depicting political, current affairs or comic scenes, these masterpieces are prepared with care and passion in the months preceding the event. Some of the floats can measure up to 16 meters high!

The typical mask, known in the local dialect as Vulón or Pupo, is a caricature of one of the members of the local band.

For Fano residents, Carnival is a very important event and if you’re able to join in on the festivities, you’ll soon see why! 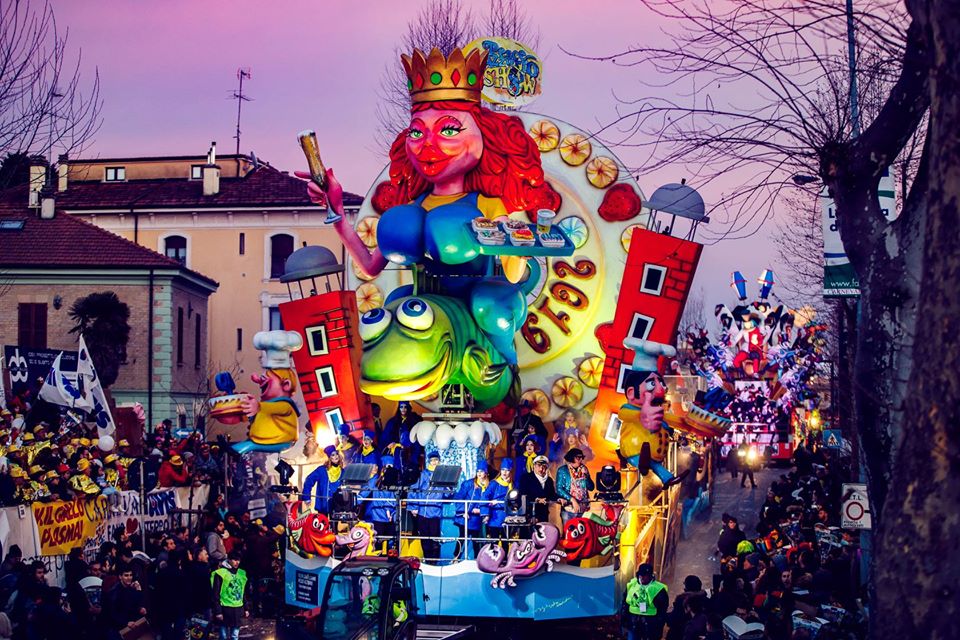 The allegorical Carnival floats are part of a competition that will take place three Sundays in February (9, 16, and 23) at 3 pm from Piazza Gramsci. On February 23, in addition to the parade, the candy “launching” will also take place followed by a huge celebration with music and dancing when the winner will be announced.

For more information, you can visit the official website of the Fano Carnival (in Italian only).