In the south of Sardinia, the Sunny Island, there is an ancient town immersed in the Mediterranean scrub and overlooking a spectacular coast: Domus de Maria.

The current town dates back to the XVIII century, but the land of Domus de Maria has a more ancient tradition, dating back to the Nuragic age (bronze age) and then to the Phoenician, Punic and Roman age. It is a real example of tangible history that seduces its guests for yet another reason: the town is nestled between mountainous and wooded backlands and a crystal clear sea, offering a complete experience. 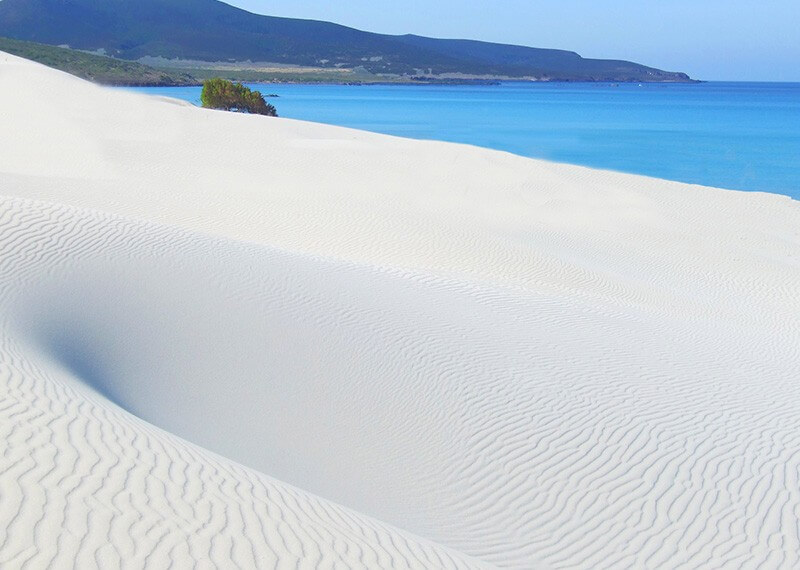 The mountainous landscape is decorated with scented Mediterranean shrubs and trees, and it is a special destination for trekking enthusiasts and nature lovers. A fairy-tale atmosphere, where Sardinian deer and boar live and where hawks and eagles fly: it’s an authentic, face-to-face encounter with Mother Nature.

On the other side, the turquoise sea brushes the golden sand of the beaches of the Bay of Chia. Su Giudeu can be reached by walking through the water thanks to the shallow sea bottom. Cala Cipolla is a beach sheltered against the wind and plunged in the greenery, from which a path to the lighthouse of Capo Spartivento starts. Porto Campana is well known for its beautiful white, sandy dunes. Then there are Sa Colonia, Monte Cogoni beach and many others, amounting to seven kilometers of amazing beaches. To the west of Chia, you’ll find Piscinnì beach, with a shallow, white, sandy sea bottom and Caribbean-like water. Tuerredda, belonging to the municipality of Teulada, close to Domus de Maria, is a spectacular beach overlooking an islet studded with little beaches which you can reach by swimming or on boat, and it is perfect for snorkeling. 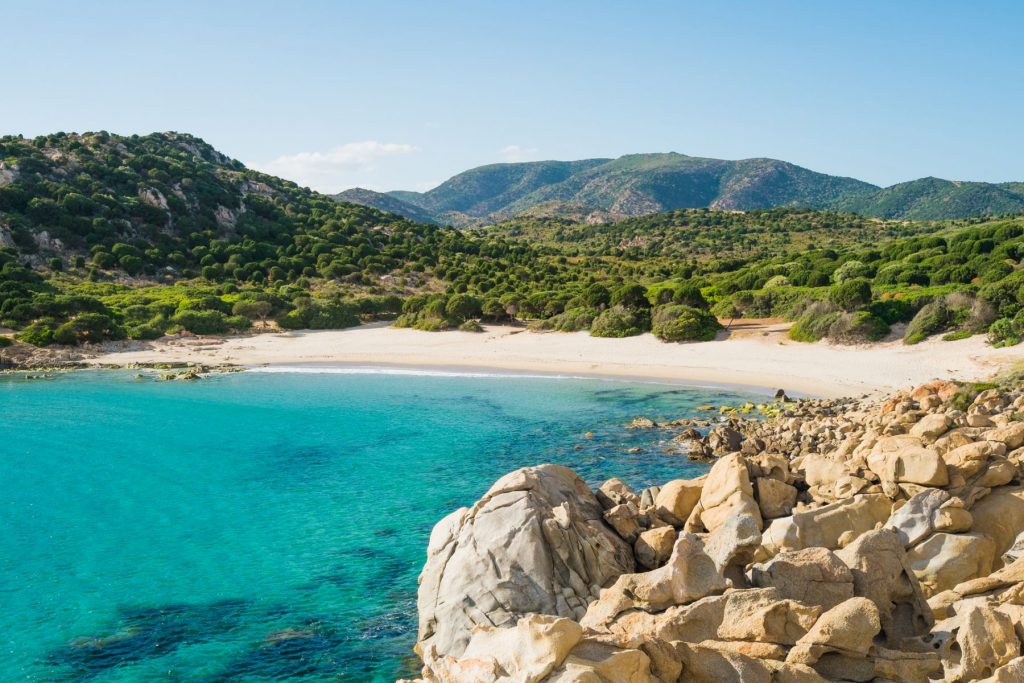 In town, you will find that Domus de Maria hosts many folkloristic and enogastronomic summer events. The fish festival, the pig festival, the sheep festival, and the goat festival all usually take place in July and in August. The fig festival is usually in June and again in September. On the other hand, if you arrive in autumn, you could witness S’Arroseri, the feast dedicated to the Virgin Mary, patron of the town, that takes place on the first Sunday of October. It’s a beautiful opportunity to enjoy the joyous, Sardinian folk atmosphere. Similarly, at Whitsun (Pentecost), in May or June, the town will amaze you with its festive atmosphere and its traditional processions of traccas (adorned carts pulled by oxen ) and horsemen with their traditional Sardinian costumes.

If you are a history lover, I recommend you visit the fascinating ruins of Bithia, an ancient Phoenician city built on Nuragic remains. The site later became a Punic and Roman city and was abandoned because of pirates’ incursions. This archaeological site has uncovered the remains of a temple, a necropolis and a tophet (an open-air sanctuary typical of the Mediterranean areas) on the islet of Su Cardolinu.

Not far from Bithia, on the promontory of Pula, you can find the archaeological site of Nora. This site is also has a Nuragic, Phoenician, Punic, and Roman past. The spectacular ruins dive into the sea, close to the beach, partially exposing an ancient residential area, some temples, a necropolis, and a tophet.

Domus de Maria has many different attractions that I didn’t even cover in this article like: the ponds filled with flamingos, the museum that exhibits many Phoenician, Punic and Roman relics, and the Tower of Chia with its spectacular panoramic spot at the top of the coast.

What are you waiting for?

Domus de Maria in Sardinia truly is paradise on earth!

Post Views: 1,603
S. Diana
The Abruzzo Region: Italy’s Best-Kept Secret
Hiking Along the Path of the Gods on the Amalfi Coast