Once upon a time there was a siren called Leucasia, named for her white skin, who fell in love with a shepherd named Melisso; however, Melisso was already in love with Aristula. The annoyed siren took revenge, overwhelming the two lovers with waves unleashed by her tail and the Goddess Minerva turned their bodies into stone. Today, the two stone points can be seen as Punta Ristola, from the name Aristula, and Punta Meliso from Melisso. Leucasia, after having lost her voice that enchanted the sailors, commited suicide and her petrified bones are now the white cliffs of Leuca. 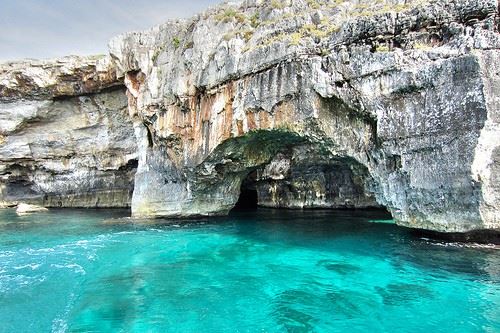 Or so the story was conceived by the Salento writer and poet Carlo Stasi to explain the origins of this wonderful place. In the wake of invented stories and legends, it seems that Santa Maria di Leuca was the first landing place of Aeneas, and subsequently of St. Peter the Apostle who came from Palestine and began his evangelizing before arriving in Rome.
Charming, appreciated, rich in seascapes but also history, and yet so geographically minimal; it only has about a thousand residents and is parter of the municipality of Castrignano del Capo. Also referred to as “Finibus terrae”, to indicate its extreme position on the boot that over the centuries has represented a meeting point for various peoples and cultures. In fact, Cretans, Phoenicians, and Greeks have left tangible signs of their passage benefiting from the fruitful meeting point between the commercial networks of East and West.
A stairway of 296 steps connects the Basilica to the underlying port, framing the monumental waterfall of the Apulian Aqueduct that ends in Leuca and flows into the sea. This tourist resort is also known for the nineteenth-century villas built according to various styles by the architects Ruggeri and Rossi; towards the end of the nineteenth century there were 43. Today, many are in disuse or appear to have been renovated. 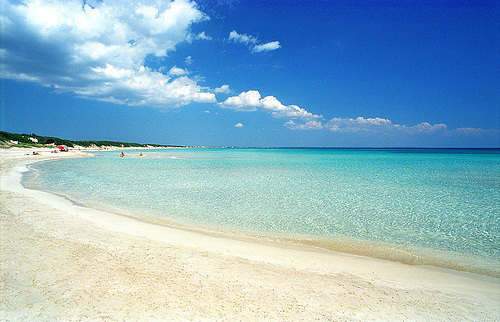 But if Leucasia enchanted seafarers with her sweet melodies, today the sea is enough to bewitch tourists, hikers, and art lovers young and old. And oh what a sea! Here the Ionian Sea melts into the Adriatic and vice versa as in an idyllic rendezvous between two lovers who can not deny each other.
The sea remains the undisputed protagonist, and just a stone’s throw from Santa Maria di Leuca are the “Maldives of Salento” in Marina di Pescoluse. One of the most beautiful and particular of the entire coast of Salento, characterized by fine white sand, shallow waters, and thanks to its south-facing position, its clear and transparent water.
The beaches are long and very wide with only a few resort establishments so that with your own towel and umbrella, you can claim your front row seat for the spectacular show of the sea. Aside from sunbathing, the area is perfect for strolling along the promenade, lively water sports, and happy hours with live music. The night of San Lorenzo is particularly special when numerous bonfires are lit for the occasion, and together, with the mantle of stars, completely illuminate the beach.

Find out about our hotel packages in the area