From a simple mistake to Teramo's main traditional dish 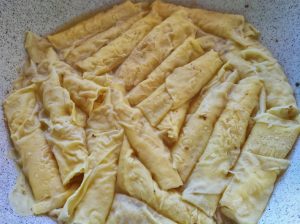 After the Christmas banquets and New Year’s parties, it’s time to start eating healthier. In this article I’m going to give you the recipe for a light, but tasty dish, typical of the Teramo area in Abruzzo: the scrippelle ‘mbusse,

Forever contended between France and Abruzzo, this dish has ancient origins. In fact, its birth is dated around the first decade of the 19th century. The funny thing is that it was created by a clumsy mistake.

First of all, for the non-Teramani, scrippelle ‘mbusse are simple and delicate crêpes, similar to the French ones. However, the big difference is that the only ingredients used to make the scrippelle are flour, water and eggs. The uniqueness of this dish is in the seasoning; you won’t find any tomato sauce or Nutella, but only chicken broth. 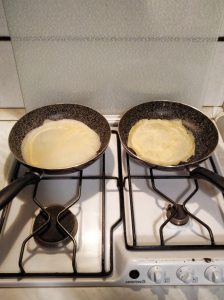 Scrippelle, once removed from the pan, are sprinkled with Parmesan cheese, rolled up and then plunged into boiling broth.

It was precisely the broth that gave life to this dish at the beginning of the 1800’s. Enrico Castorani, the assistant cook in the French officers’ canteen based in Teramo, used to prepare crêpes instead of bread. One evening, as usual, Enrico was preparing dinner when, by mistake, he dumped the crêpes in a pot of steaming broth. Therefore, to cover up his mistake, Castorani decided to serve the dish as a first course. There is no need to emphasize the huge success that these crêpes had; they became the symbol of Teramo’s culinary tradition!

The bizarre name of this dish, scrippelle ‘mbusse (‘mbusse means wet in the local dialect) has a French origin, mixed with the local dialect. The etymology of the name crêpes seems to derive from the French crêpe s’appelle. The term scrippelle, in fact, is nothing other than its dialectal form. 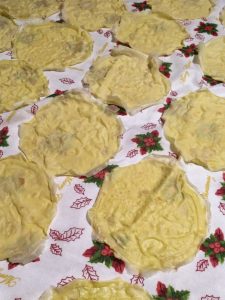 Besides the origin of the name and the claim of the Abruzzesi for the crêpes, scrippelle do not have much to do with French crêpes. The ingredients are different; the milk in French crêpes is replaced with water in the scrippelle, and while the former are considered a dessert, the latter are a first course dish.

For a short romantic getaway or a weekend with friends, a steaming plate of scrippelle ‘mbusse  with a view of Gran Sasso is much better than a crêpe with Nutella under the Eiffel Tower, isn’t it?