One of the first motorbike trips I went on with my boyfriend was a tour of Lucca, Pisa and Arenzano. In this article, I’ll tell you about the day we spent in Lucca. It’s one of the most loved cities in Tuscany. It’s also known as the “city of 100 churches” and famous all over the world for being the only example of a city with defensive walls still intact dating back to the modern age.

The city’s ancient history is obvious everywhere you turn. The urban structure follows the old orthogonal Roman plan. As a matter of fact, San Paolino Street and Fillongo Street were modeled after the Roman Cardo and Decumano. Piazza dell’Anfiteatro was built on the ruins of the Roman amphitheater and the Church of San Michele is where a Roman Forum once stood. 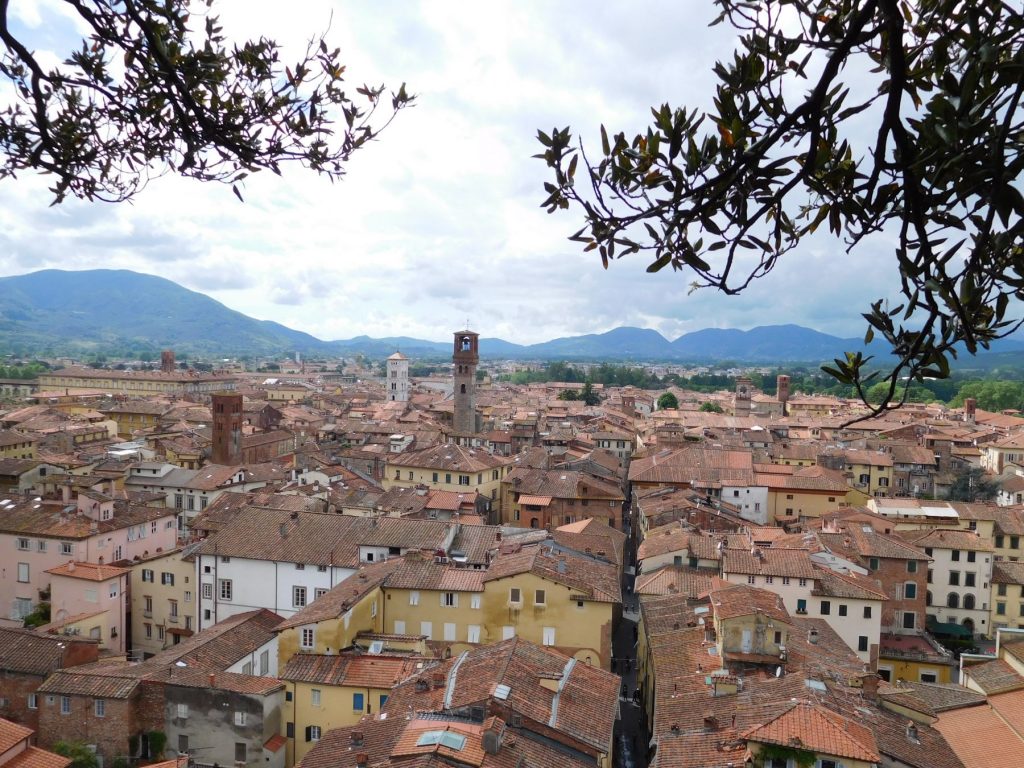 Lucca is a tiny, romantic town and definitely the right place for long walks hand in hand, even in winter, on the walls or in the narrow streets full of small shops. You can also enjoy delicious dishes in the typical excellent restaurants.

You can reach Lucca both by train (from Pisa and Florence) and by car. There are a lot of parking areas outside the walls, where the parking is quite cheap or take a bus to reach the city center, but I suggest walking, instead. 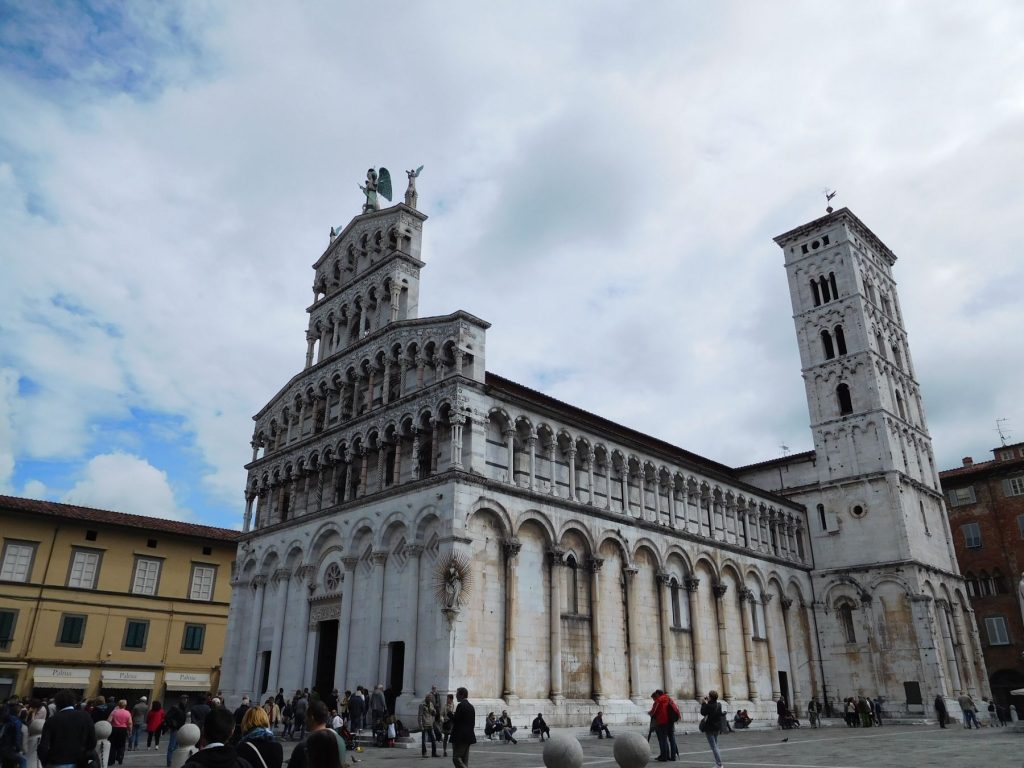 Let’s begin our tour. I’ll guide you through Lucca step by step. Enter from Porta San Donato and walk along San Paolino Street until you reach Piazza San Michele, where the Church of San Michele stands, impressive and stunning. The façade stands 4 m high above the roof of the church and it has four rows of loggias. The roof is topped by the statue of San Michele Arcangelo in the act of killing the Dragon with a spear. According to a popular legend, there’s a diamond on the statue’s hand and if you’re lucky you can see it shining even on the darkest nights.

The second stop is Piazza Napoleone, the largest square in Lucca. It takes its name from Napoleon’s sister, Elisa, who commissioned it at the beginning of the nineteenth century to enhance the Ducal Palace. It’s one of the locals’’ favorite places to eat, meet and have fun. There are a lot of shops, restaurants and characteristic pubs.

Crossing Piazza del Giglio, we reach Piazza San Giovanni, where we can see the façade of the Cathedral, consecrated to San Martino. The structure is asymmetric because it had to be adapted to the preexisting bell tower. The façade follows the style of the Pisa Cathedral, with its colorful marble and loggias. Go inside and visit the aisles and the Funeral Monument of Ilaria del Carretto created by the artist Jacopo della Quercia. Ilaria del Carretto was the wife of one of the most powerful Lords of Lucca- Paolo Giunigi.

If you want to enjoy Lucca all at once, you need to climb to the top of the Giunigi Tower (Torre Giunigi) or the Tower of the Hours (Torre delle Ore). These are the only two survivors of the 250 towers that enriched the town in the Middle Ages. The Giunigi Tower is 45 m high and has a roof garden at the top with ancient holm oaks. From the top, you can enjoy an amazing view. You can see the Apuan Alps, the medieval roofs and the Roman structure underlying the urban plan of the city. 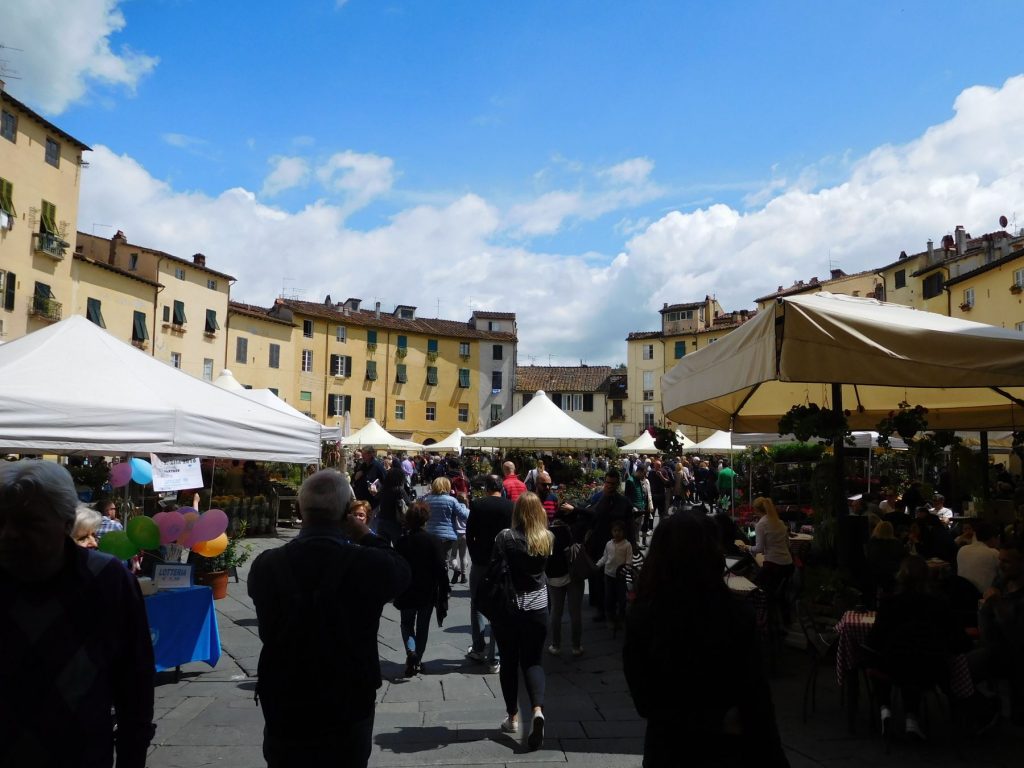 The next step is Piazza dell’Anfiteatro, one of the most beautiful squares in Italy. Once you’ve seen it, I’m sure you’ll agree with me. The architect Nottoli designed it in 1830 according to the ancient design of the Roman amphitheater. In order to proceed with the construction, most of the Roman buildings were demolished and the ruins are still visible inside the shops that surround the square. Piazza dell’Anfiteatro is unique, both for its shape and for the appearance of being an “enclosed square”. The square’s only access is through four small gates. Its few entrances, soft colors, tiny workshops and restaurants make this square harmonious. If you visit it during the weekly open-air market you’ll enjoy it even more.

Just outside Piazza dell’Anfiteatro, you’ll find the Church of San Frediano. It was founded by the saint himself and it’s one of the oldest places of worship in Lucca. On the façade, there’s a beautiful mosaic (a very rare feature for a Romanesque church) representing the Ascension of Christ in the presence of the Apostles.

The walls are not particularly high (12 m), but their length (4 km) and its width (30 m) are impressive. Since there was no enemy to defeat, the city transformed the defensive walls into a beautiful tree-lined avenue where you can walk, enjoy the landscape and take part in the many events the town of Lucca organizes.

Now it’s time for food tips! If you want to have a quick lunch, go to one of the food shops in Fillongo Street and choose between different types of bread, cured meat, cheeses and other toppings. You’ll will have the perfect sandwich. Don’t miss the chance to taste all the other delicious typical dishes, such us garmugia (a soup with onions, peas, artichokes, asparagus, meat, bacon, oil and toasted croutons); farinata (an omelette made out of just chickpeas). Among the second courses, you can taste rabbit stew, rovelline: breaded and fried slices of beef. One of the best desserts is the chestnut cake, made with chestnut flour, walnuts, pine nuts, orange peel, raisins, rosemary and olive oil. Don’t miss the chocolate cake with a boiled rice filling, dark chocolate, cocoa, candied fruit, pine nuts, raisins, nutmeg, and eggs.