The covered bridge that overlooks the Ticino

Each city has its symbolic monument. If you take Corso Strada Nuova, one of the main streets of the center of Pavia, and you go along to the end of the street, you will arrive at what Skyscanner, the international search engine of flights, has classified as one of the 30 most beautiful bridges in Italy. How to give it wrong. I am talking about the Covered Bridge, also known as Ponte Vecchio (just like the famous Ponte Vecchio in Florence).

It is over 200 meters long and connects the old town of Pavia to Borgo Ticino, a typical district located along the river bank. It is perfect if you want to take a relaxing stroll along the Ticino. 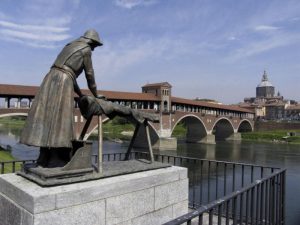 If you cross the bridge and turn on your left, you will be in via Milazzo, a picturesque street with colourful houses, where the laundresses once used to wash their clothes in the river. Their activity was so important that at the top of the street, a bronze statue called the Laundress Statue was placed in remembrance of them. 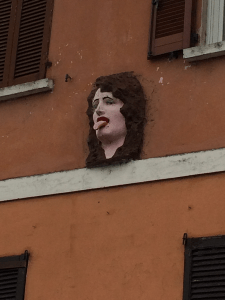 At the number 193 of Milazzo Street, you need to see the Linguacciona’s home. It is called like this because in its facade there is the sculpture of a woman’s face sticking out her tongue, which symbolizes a raspberry addressed to all those who love to talk behind other people’s back. It was the house owner’s idea, Mr. Bergonzi, a famous lavender businessman who, tired of the constant gossip of the laundresses about him, decided to dedicate this statue to them.

The origins of the covered bridge are very ancient. We have to go back to Roman Age, when Pavia was called Ticinum, taking its name from the river that crosses it. Already at the age of Emperor Augustus, a bridge connected the two extremities of the river and, still today, we have a trace of what has remained. During the lean season of Ticino, in fact, you can see a pylon, whose central position tells us that at that time the current of the river flowed from the opposite side.

In the 14th century, a new bridge was built on the ruins of the Roman one and it was completed in 1354. Two centuries later, Galeazzo II Visconti wanted the bridge to have a roof covered by one hundred small granite pillars, characteristic that makes it so special. Then, to the central part of the bridge ware added a small chapel and, at the ends, two entry portals. 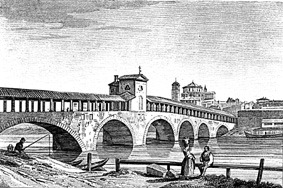 Unfortunately, the Second World War began. The bombings ruined it and, in the postwar period, it was even shuttled down. In 1949, however, it was rebuilt, even if today it is much wider and taller and the arches are five instead of seven.

In the middle of the bridge, you can also notice the testimony of a very important personality that Pavia can be proud to have had hosted, even if only for one year. I am talking about the scientist Albert Einstein. In 2005, in fact, a plate was posted dedicated to the 50th anniversary of his death.

Like every bridge, even behind the construction of the covered bridge is hidden a legend. It is said that it was built by the devil, on Christmas Eve of the year 999, when there was not yet a bridge above the Ticino. There was a big fog and the devil offered some pilgrims who lived in the Borgo Ticino to bring them with a ferry at midnight Mass in the city. After taking them, he pointed the shadow of a bridge made of fog, which would become of stone only in exchange for the soul of the first who would cross it. The archangel Michael, who was among the faithful, sacrificed a goat instead of a man, without the knowledge of the devil. Even today, during the days of dense fog, the bridge has a very suggestive effect, because it seems to be really made of fog. You can see it like the faithful saw him that night.

Pavia has a very strong connection with its river. In fact, the Ponte Coperto and the Borgo Ticino host each year one of the most characteristic events of the city: the Palio of Ticino, where they perform historical reconstructions, parades and competitions, including the archery competition and the barcè racing (the typical Ticino boats). The Palio is waiting for you in Pavia in June.